Nordra is the solo project of Zen Mother’s singer and guitarist Monika Khot, on label SIGE Records. Cinematic in nature, Nordra has utilized the trumpet to evoke an uncommon feeling of dread, along with sequenced beats, vocals, and guitar loops.

Originally from rural New England and now living in New Mexico, William Fowler Collins is an American composer, recording artist, and performer of dark minimalist music and drone music. Collins will perform material based on his new release, Field Music (SIGE). “Field Music isn’t a soundtrack for the bomb itself, but for the land that bore witness to its inception.” -THE WIRE

Faith Coloccia is an artist and composer/musician. She performs in Mamiffer, Mára and Barnett+Coloccia. She is the co-owner of SIGE records.

Daniel Menche is an experimental musician and multidisciplinary artist from Portland who has been performing and recording since 1989. He will be performing an electro-acoustic set of string drones reflecting the nature of his most ambient recordings on Sige Records — atmospheric and ominous drones that defy gravity.

Aaron Turner is a musician and artist known primarily for his participation in groups such as SUMAC, ISIS, Mamiffer and Old Man Gloom. His work has been informed by a lifetime involvement with metal/heavy music, often materializing in highly abstracted forms utilizing improvisation and longform composition. Turner is the founder of the Hydra Head Records label and co-founder of SIGE Records with partner Faith Coloccia. This event will mark his first collaboration with Marshall Trammell.
Posted by Faith Coloccia at 7:13 PM No comments:

Thanks to The Wire: Adventures In Modern Music ! January Rewind issue:
NORDRA (Monika Khot) Ranked #20 out of the 50 best releases of the year and Ranked #1 in the top 10 Noise And Industrial releases of the year with Pylon II!
and a William Fowler Collins- Field Music review! 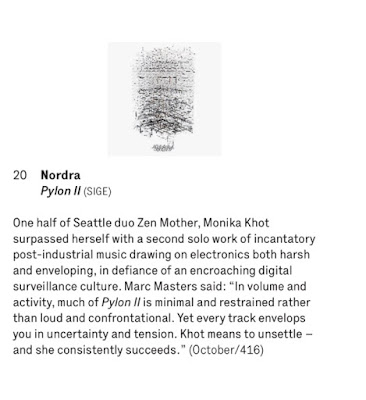 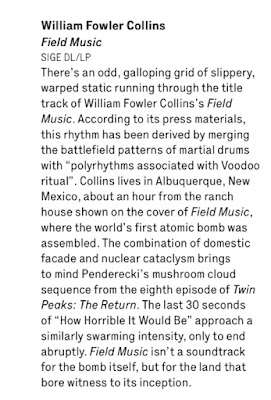 Posted by Faith Coloccia at 10:54 AM No comments: